The previous President of the European Commission, José Manuel Barroso, who was in the job for 10 years, has been head-hunted by Goldman Sachs to become their chair and advisor and to lead the way on their behalf during the Brexit negotiations. Barroso's extensive knowledge of the internal functioning of the EU and his extensive network of contacts means that Goldman Sachs will have an enormous advantage during the upcoming period of uncertainty, and shows that the current revolving door rules are completely inadequate. 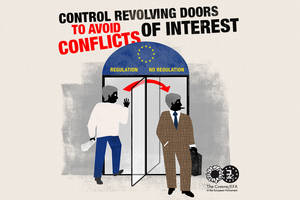 Currently, Commissioners are only obliged to request authorisation for a new job move during 18 months after they leave office. Incredibly, Barroso is already working in 22 different post-Commissioner roles, ranging from being a member of the Bilderberg steering group to a member of the European Business Summit's Honorary Committee. However, this new role is raising alarm bells not least because of Goldman Sach's clear role in the financial crisis that rocked the world and negatively affected the European economy and Euro. The Greens/EFA group has long called for reforms to the Code of Conduct for Commissioners: we believe that, since Commissioners receive a “transitional allowance” for three years after leaving office, a three-year cooling off period would be the absolute minimum requirement. However, other countries such as Canada impose 5 year cooling-off periods. Indeed, since in this case Barroso was in office for 2 terms, a more stringent cooling off period would be in order. In the report that is currently being drafted by Greens/EFA member Sven Giegold, which deals with transparency and integrity in the EU institutions, we have called for a three-year cooling off period for Commissioners. However, so far both Conservatives and Social Democrats have asked for this provision to be deleted. The report is due to be voted on in the Constitutional Affairs Committee (AFCO) on 12 September 2016.  In addition, over the course of the next few months, Greens/EFA member Pascal Durand will be drafting a report on how the European Parliament should “scrutinise” the declarations of interest of EU Commissioners as the current “process” drastically lacks rigour, leaving a lot to be desired. This report will include recommendations on how to reform the Code of Conduct for EU Commissioners. This issue will also be discussed on Wednesday 13th July during the public meeting of the Budgetary Control Committee.