China: Forced labour and the situation of the Uyghurs in the Xinjiang

Today, MEPs will debate and vote on a resolution on forced labour and the situation of the Uyghurs in the Xinjiang Uyghur Autonomous Region. The Parliament vote, strongly pushed for by the Greens/EFA group, is in response to ongoing human rights violations, internment and forced labour of more than one million Uyghurs in China's autonomous region of Xinjiang. Recent revelations have newly emphasised the urgency of these concerns.

Reinhard Bütikofer MEP, Chair of the European Parliament's China Delegation and Co-Chair of the Inter-Parliamentary Alliance on China, comments:

"The atrocities against the Uyghur ethnic minority in Xinjiang and rampant state-imposed forced labour are crimes against humanity. The European Parliament is calling on European companies to break off business relations with Chinese partners if they abet human rights violations. International corporations violate every ethical norm if they make profits off of the backs of forced labourers. We demand that the comprehensive investment agreement with China must include adequate commitments to respect international conventions against forced labour." 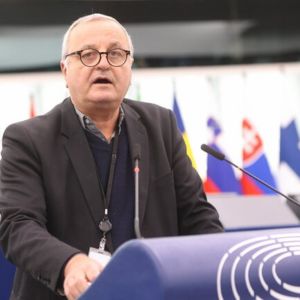