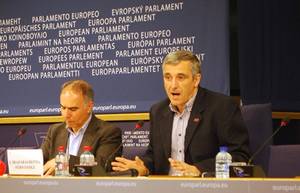 He was joined for the press conference by Eyyup Doru of the Kurdish Peace and Democracy Party or BDP.

Mr Irazabalbeitia travelled to the country to observe the elections for himself and raised concerns with what he witnessed in the Kurdish area of Turkey.

"What struck me was the substantial military presence surrounding and even inside some polling stations.

"Having such a large number of military personnel present in this way can be very intimidating.

"These people were clearly and visibly armed, and I saw some examples of soldiers inside polling stations with their arms placed on the tables.

"What kind of signal does this send to people coming to cast their ballots?"

"What I saw was not a normal situation for free and fair elections.

"There is also concern about the repeated power failures that disrupted the election and the ballot counting.

"I called on the European Commission to send observers but they declined claiming that it's not necessary as Turkey is a member of the OSCE. This is regrettable and I believe that independent observers are important in any election to ensure fair play."

Pre-trial detention in the EU

EU-Russia : Components for a strategic reset