Speaking ahead of a European Parliament vote on a report that accuses Russia of propaganda against the West, Latvian MEP Tatjana Ždanoka says MEPs must avoid double standards in dealing with Russia.

At next week's plenary session of the European Parliament MEPs will vote on the Fotyga report which accuses Russia of engaging in propaganda against the West. 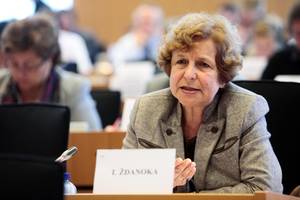 But Tatjana Ždanoka has warned against double standards, and highlights a report in the Financial Times this week which presents Russia in a negative light based on a complete misrepresentation of history.

"We cannot accept double standards from the EU in dealing with Russia.

The MEP pointed to an article in the November 14, 2016 Financial Times International entitled "Baltic states fearful of US policy changes" as an example of anti-Russian propaganda, based on false historical facts. The article implies that Latvian fear of Russia is based on the struggle for national independence a century ago.

The article says:  "Bear Slayer’s Day honours Latvian freedom fighters who secured independence in 1919 against Russian forces. This year, US troops were in Riga for the commemoration – part of Nato’s attempt to reassure the Baltic state, as it faces a renewed threat from big bear to the east."

"This is a blatant misrepresentation of history in order to paint Russia in a bad light. In reality the Latvian national holiday Bear Slayer’s Day is related to the victory of Latvian independence fighters in 1919 over the troops of German-backed warlord Pavel Bermont-Avalov.

"He did not represent any Russian government – neither the Russian Empire, nor Soviet Russia. The decisive victory of Latvian forces on November 11 became a holiday – Bear Slayer's day.

"The name actually comes from a military award - the Order of Bear Slayers - established to honour the soldiers and based on a 19th century poem “Bear Slayers” by Andrejs Pumpurs who was an officer in the Russian army and well-known Russophile.

"Latvian-Russian relations have a chequered history. There have been enough tragedies in the past. We must not allow historical misrepresentation and blatant anti-Russian propaganda to stand in the way of reconciliation."