Jill Evans MEP asks 'who made my clothes'?

As the third anniversary of the Rana Plaza clothing factory tragedy approaches this Sunday, Plaid Cymru MEP Jill Evans is backing a campaign for ethical clothes labelling in Europe.

Over a thousand people died and more than two thousand five hundred were injured in Dhaka, Bangladesh in 2013 when the Rana Plaza complex, housing several garment factories collapsed. 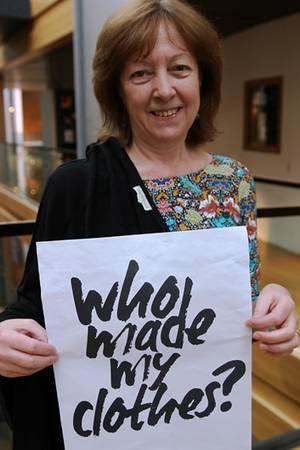 This avoidable tragedy is one of the deadliest garment factory accidents in history, but poor construction standards and inadequate health and safety provision has been blamed for loss of life in garment factories elsewhere in the developing world.

Now Jill Evans is joining with MEPs from across Europe to demand action from the European Commission.

Jill Evans is calling for new legislation that will compel clothing retailers to include ethical labelling in their products before they can be imported to the EU.

This will mean that consumers get to know not only where an item was made, but also whether those who made it are fairly employed and work in a safe environment.

"Many of us wear clothes made by people working in horrendous conditions in the developing world, without actually realising it.

"If as consumers we were told not only where an item of clothing is made, but whether the workers are treated fairly and safely, then we'd be able to make a more informed choice.

"Crucially, it would mean that clothing manufacturers in developing countries would be forced to improve working conditions.

"Three years on from the Rana Plaza tragedy, many people in the developing world are still forced to work in dangerous, dirty sweat shops for a few dollars a day.

"We can make a real difference to people's lives in the developing world by introducing ethical clothes labelling."

Bland declarations on employment will not solve inequality