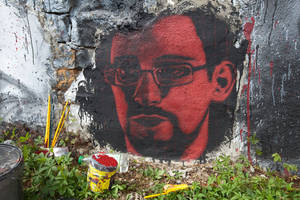 The Greens/EFA group last night agreed to nominate whistleblower Edward Snowden for this year's Sakharov Prize (1). The nomination for the EU's annual award for 'freedom of thought' recognises his role in shedding light on the mass surveillance practises of the US and European secret services. Commenting on the nomination, Greens/EFA co-presidents Rebecca Harms and Dany Cohn-Bendit stated: “With this nomination, our group's intention is to acknowledge the enormous service Edward Snowden has done for human rights globally and for European citizens. "Edward Snowden has risked his freedom to help us protect ours and he deserves to be honoured for shedding light on the systematic infringements of civil liberties by US and European secret services. Instead of being given asylum in the EU, he has been abandoned by cowardly European governments. We hope our nomination will receive wide support in the European Parliament and that this can serve as a symbol of rejection of this gross, massive and illegal intrusion into the privacy of citizens worldwide." (1) The Sakharov Prize is an award conferred annually by the European Parliament on individuals who combat fanaticism, intolerance or oppression. Political groups of the European Parliament can make one nomination for the award. The Parliament's foreign affairs, development and human rights committees vote to select a shortlist of 3 of the nominated candidates, with the final decision being taken by the Parliament's conference of presidents in October. More details: http://www.europarl.europa.eu/aboutparliament/en/00f3dd2249/Sakharov-Prize-for-Freedom-of-Thought.html