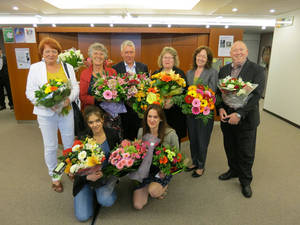 Greens/EFA MEPs pose with the flowers they received following an online call by activist Rick Falkvinge to send flowers as a thank you to all of the MEPs who voted to reject ACTA. The flowers received today belong to all of us, to everyone who has done at least something (big or small) to help defeat ACTA. This is exactly how it should be. Politics is best as a participation sport. 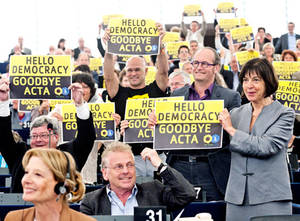 ACTA Defeated! (39 votes in favour; 478 against; 165 abstentions) EPP failed in their attempt to have the vote posponed. The vote to reject ACTA effectively ends the prospect of the EU acceding to the treaty. The Greens/EFA group has raised its concerns about this agreement since the outset of the shadowy negotiations, as have an ever growing number of citizens. Today represents a victory for the citizens who mobilised and forced their MEPs to listen, and Green MEPs celebrated this by holding up posters in the Hemicycle saying "Hello Democracy, Goodbye ACTA" 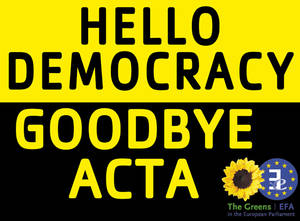 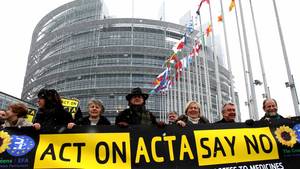 The final plenary vote on ACTA will take place next week, with plenty of opportunities for the procedural dirty tricks we've seen so far during committee votes. The first will come on Monday evening as the plenary opens.  Any attempt to have ACTA removed from the agenda could take place then.  During Tuesday's debate, we expect once more to hear arguments for postponing the vote until after the ECJ has given its opinion, a delaying tactic that has cropped up before in the false hope that campaigners would loose interest.  The final vote will come Wednesday, with heavy pro-ACTA lobbying set to continue up to the last minute in Strasbourg and a result impossible to predict. We have seen in the committee votes that there is hope if civil society and citizens also make their voice heard. The whole European Parliament will be voting so contact your MEP now!

Petitions Committee (PETI) held a hearing with Avaaz whose ACTA petition reached 2,847,149 by morning. No vote was held, but Greens/EFA MEPs wore ACT on ACTA t-shirts and led the majority of speakers in praising the petitioners and speaking against ACTA. According to Raul Romeva "This is not only a juridical debate, it is highly political and with deep political implications. As elected representatives of the EU citizens, the MEPs must ensure that their voice and their will is finally heard. Our dignity as an institution is at stake here." 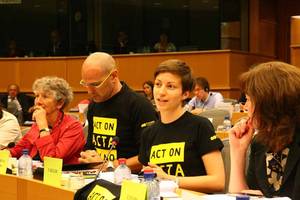 Civil Liberties Committee (LIBE) vote: 36 votes in favour of rejecting ACTA, 1 against and 21 abstentions, based on its compatibility with with fundamental rights. Committee adopts MEP Droutsas' opinion on ACTA despite cheap tricks from EPP (Conservatives) attempting to disrupt the vote. Meanwhile, ALDE (Liberals) suffer from delusions of grandeur as they blow their won trumpet and zig-zag back to their original position against ACTA. That's three-strikes against ACTA today, appropriately enough.

Legal Affairs Committee (JURI) vote on Gallo report: 12 votes against ACTA, 10 votes in favour and 2 abstentions. MEP Gallo says she will withdraw her name from the report. The Secretariat will adjust the text so that it says JURI recomends the International Trade Committee (INTA) withhold consent to ACTA. Next vote today is in LIBE...