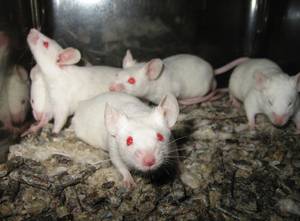 A new scientific paper is likely to cause a rethink of how the safety of GMOs is evaluated before they are placed on the market. Published in the peer reviewed Food and Chemical Toxicology journal ”Long term toxicity of a Roundup herbicide and a Roundup-tolerant genetically modified maize”, by Séralini et al. details a number of disturbing health findings that show how entirely inadequate industry testing is.

This is the first study in the world that has tested GMOs on rats for two years. Up until now, the maximum duration of toxicological experiments on rats was 3 months, and most of these tests were not even mandatory and not systematically practiced by industrial applicants.

In the study, the genetically modified maize NK603, which Monsanto made tolerant to its own flagship herbicide product Roundup and which was authorised for food and feed in the EU, was given to rats for a period of two years, with and without the associated herbicide. Results were controlled by comparison with rats on a diet of conventional maize. The authors were able to measure the importance of both the genetically modified NK 603 and the Roundup herbicide variables for a period equivalent to the average lifespan of laboratory rats.

The results are extremely worrying: increased mortality in all groups of rats submitted to the GMO and / or herbicide, increase in occurence of kidney and liver disease and development of large tumours, particularly in females... And these effects seem to appear at the end of four months, which completely invalidates the safety findings from experiments made by manufacturers for periods up to only three months.

For the Greens, this study requires no less than a complete halt to the marketing and cultivation of GMOs in Europe and the world. The economic interests of the GM seed and agro-chemical world should not make the European population hostage to this dangerous experiment and lax laws. We ask the Commissioner for Health and Consumer Affairs, Mr Dalli, to reject all applications for authorisation of cultivation or marketing of GMOs and revoke authorisations already granted for the cultivation of MON810 maize, the Amflora potato, as well as for imported GM soybean maize.

The European Food Safety Authority (EFSA) which celebrates its 10th anniversary this year amid controversy about its independence and conflicts of interest, should review the guidelines for the risk assessment of GMOs and require long-term environmental and health studies of GMOs to be carried out to properly evaluate them. The article published yesterday confirms vividly that all GMOs have not been evaluated over the long term, as European regulation require, and that they are likely to have significant impacts on health. Do we want to take that risk?