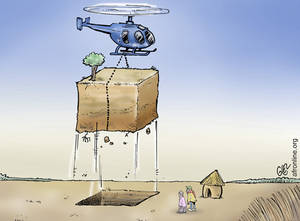 "The problem of land grabbing and concentration of land ownership in a few hands, violence against small farmers to get access to land for export production, and the systematic undermining of food sovereignty has been known for many years", said Martin HĂ¤usling, one of the initiators of the conference, "but we need to tackle it now as Europeans. Our European model of agriculture is not as sustainable as some of my colleagues claim. We are importing animal feed and raw material for agro-fuels which are grown on 35 million hectares that are not ours; and we contribute to climate change and land grabbing, because our policies are forcing farmers into an industrial model of agriculture and further liberalisation of trade in farm products."

RenĂ©e VellvĂ© from GRAIN called for building alliances across NGO movements and governments to stop land grabbing and to create more public political pressure in countries where land grabbers are headquartered, "from India to the Netherlands".

Speakers from European Alliances like Terre de Lien highlighted that also in Central and Eastern Europe, recent years have seen a rapid concentration of farmland in very large agribusinesses, based on massive national or foreign investments. Jim Harkness of IATP highlighted the effects of land ownership concentration in the USA linked to corporate control of farming, and of changes in the food security policies of China on entire continents like Africa.

Finally, according to the Chair of the Human Rights Subcommittee in the European Parliament, Barbara Lochbihler, human rights have absolute legal supremacy before any other aspect, including economic interests. Therefore, "any human rights violation that is caused by the appropriation of land, at home and in third countries, constitutes a clear breach of international law."