EU strategy on equality between women and men post 2015

Mon. 8 June – EP plenary vote; Tues. 9 June - vote The European Parliament has voted Tuesday for the EU to do more to ensure gender equality and that women's rights are promoted across the EU. This was a very good day for a more gender equal Europe. MEPs have sent a strong message to the Commission, asking for a new strategy for women's rights and gender equality in Europe based on priority areas of the previous strategy, taking into account multiple discrimination and including women with disabilities, migrant and ethnic minority women, Roma women, older women, single mothers and LGBTI. The text also reinforces gender dimension in EU policy and action on equal pay, work/ life balance, violence against women and gender violence. It also strongly supports sexual and reproductive health and rights.

Commission under fire for blocking proposed fund The Greens/EFA group in the EU Parliament submitted a complaint Tuesday to the European Ombudsman against the European Commission for blocking a proposed funding programme under the EU budget aimed at promoting cross-border investigative journalism. The complaint focuses on the Commission's use of dubious administrative procedures not to implement a programme for investigative journalism, despite the fund having been proposed by the European Parliament in 2009 and officially included as an EU budget line from 2010-14. For the Greens, it is unacceptable that the Commission has used underhand administrative methods to block this important initiative. The Greens are now calling on the Ombusman to investigate the matter and the methods used by the Commission to block the funding.

In a rare and unilateral stunt, EP president Martin Schulz has pulled a fast one Tuesday night and used an underhand administrative procedure to postpone Wednesday’s vote and prevent divisions among the larger political groups from being put on the record, notably as regards the highly contentions ISDS investor protection mechanism. MEPs were asked to vote at 8am Wednesday morning whether or not a debate on the postponement should take place. The vote to postpone the debate on TTIP adds insult to the democratic injury of Tuesday nights’ unilateral decision by EP president Schulz to postpone the vote on the EP's TTIP resolution. Avoiding the public debate on TTIP damages the reputation of the European Parliament. For the Greens, this saga clearly shows that the mainstream parties are panicking and are clearly divided on TTIP. The decision to postpone the debate only passed by two votes. This turn of events is a result of the public pressure and growing mobilisation against TTIP in all EU member states. The momentum on TTIP is clearly shifting and the Greens will keep the pressure up. 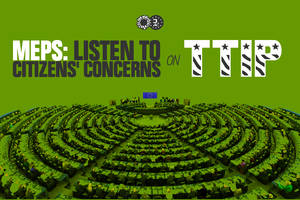 Backslide in democratic values in Hungary

Weds. 10 June – EP plenary vote
Debate 19 May The European Parliament adopted Wednesday a resolution on the situation in Hungary. This follows last month's debate on the latest worrying developments under Hungarian Prime Minister Viktor Orban, notably the questionnaire on immigration and recent statements about reinstating the death penalty. The text calls for the creation of a new EU mechanism to ensure fundamental rights are upheld. The shameful xenophobic, government-mandated survey on migration and statements on the death penalty underline how far Mr. Orban has lurched from the common values which underpin membership of the European Union. The Greens welcome these proposals, but are clearly alarmed that conservative MEPs (EPP Group) could not agree to the common cross-party resolution. It seems that their loyalty to Orban, who is from the same political family, is apparently still more important than the commitment to common European values.

Weds. 10 June – EP plenary debate and vote MEPs voted Wednesday on a resolution on EU-Russia relations, calling for sanctions on Russia to be maintained and extended as long as Russia does not implement the Minsk agreement. Beyond sanctions, the EU must reduce its dependence on fossil fuels and authoritarian regimes in order to enhance the effectiveness and the credibility of its foreign policy. To this end, it is correct that no official European Parliament delegation travels to Russia under the current circumstances of the blacklist* of EU politicians. We welcome that the text calls for legislation ensuring the full transparency of political funding and financing of political parties in the EU in line with the recommendation of the Council of Europe with regard to political or economic stakeholders outside the EU. Unfortunately, two out three Green amendments were defeated. The first asked to counter Russia propaganda with professional reporting. The second condemned the recently adopted bill** on "undesirable foreign organisations" as yet another worrying sign of the ongoing crackdown on civil society. * The Russian blacklist includes Greens/EFA co-president Rebecca Harms and Green MEP and Euronest chair Heidi Hautala. ** The bill allows Russian authorities to bar international NGOs seen as threatening Russia's defence capabilities or constitutional foundations.

Weds. 10 June – EP plenary debate The forthcoming European Games in Baku have shone the spotlight on Azerbaijan's poor human rights record and its detention of high profile democracy and rights activists. The provocative response of Azeri president Aliev towards European diplomacy only underlines these concerns. The Greens believe the EP cannot shy away from highlighting concerns and pushing for a more proactive EU approach, notably with regard to the release of all political prisoners, which include Sakharov Prize nominee Leyla Yunus and Rasul Jafarov. 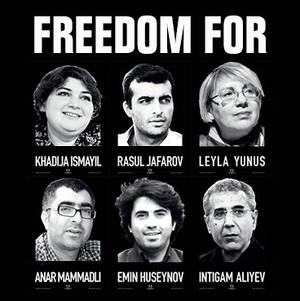 The Greens/EFA pushed for a resolution to be adopted by the European Parliament but did not get a majority in favour.

Thurs. 11 June – EP plenary vote
Debate 20 May The European Parliament adopted Wednesday its annual report on Turkey's progress in the context of the EU accession process. The report reveals a strained EU-Turkey relationship. The language is more critical on the perspective of Turkish membership in the European Union and about the increasingly authoritarian trends of President Erdogan’s government. It also clearly portrays the shift towards a more enlargement-hostile European Parliament after the 2014 elections. The EP is even divided when it comes to visa liberalisation for Turks, which was removed from the text by just one vote. At the same time the Parliament shows enthusiasm about Sunday’s elections (7 June) (adopted thanks to a Socialist, Liberal, Green amendment), which have proven "the democratic spirit of its citizens", considering "the very high voter turn-out and the impressive participation of civil society volunteers on election day." The report calls this the "most inclusive and representative parliament in Turkish modern history." Particularly the historical break-through for the pro-Kurdish HDP, with which the Turkish Green party is in coalition, raises high expectations and hope that next year's progress report on Turkey will speak a much more positive and constructive language. This is a clear signal on the need for the EU to do much more to proactively promote democracy and human rights in Turkey, as well as supporting those in Turkish society who are pushing for democratic reform. Sunday's elections have hopefully set in motion a positive process of change for Turkey and the EU must do all that it can to support this.

Weds. 10 June  – EP plenary debate; vote Thurs. 11 June The European Parliament adopted Thursday a resolution on the ongoing corruption scandal at the international football authority FIFA. MEPs have called for EU institutions and national authorities to play an active role in the reform of FIFA. The recent FIFA corruption scandal that led to the long overdue resignation of Sepp Blatter shone the spotlight again on the dubious decisions to award World Cups to Qatar and Russia. The Greens believe we should not be afraid to call a halt to such projects. MEPs have called for fulfilment of human rights and labour rights by a country to be a fundamental precondition for the award of any tournament. The Greens particularly welcome the will to redress gender balance in the misogynistic organisation.

Other Greens/EFA motions for resolutions