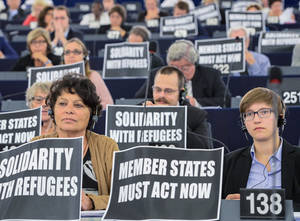 Mon. 7 Sept. – EP plenary debate; vote Tues. The European Parliament approved Tuesday a new law, adapting the EU's ban on the trade in seal products to make it fully compliant with World Trade Organization rules. The new law will ensure the ban is fully WTO-compliant and should no longer be at the whim of legal challenges. The new regulation is therefore improved, with the removal of the so-called "MRM exception" - import of seals products derived from hunts conducted for the purpose of marine resource management. Further information
Stany Grudzielski - Advisor on Internal Market and Consumer Protection
stanislas.grudzielski@ep.europa.eu ____________________________

Keeping water as a basic right and public service

Mon. 7 Sept. – EP plenary debate; vote Tues. The European Parliament adopted Tuesday a report to follow-up on the massively popular European Citizens' Initiative aimed at protecting the right to water (Right2Water). The resolution gives explicit support to the goals of the initiative, despite a move by centre-right MEPs to block this. For the Greens, the major popular mobilisation behind the initiative shows this is an issue that is a top priority for Europe's citizens and it befits the EU institutions to respond positively to this appeal for action. The ongoing threats to the availability of water as a basic right and public service were again confirmed this summer, with the planned inclusion of water services in Greece as part of the privatisation list under the Greek bailout programme. Further information
Terhi Lehtonen – Advisor on environmental issues
terhi.lehtonen@ep.europa.eu ____________________________

Weds. 9 Sept. – EP plenary debate and vote (Tues. - debate on Keller report) MEPs debated Tuesday the dramatic situation of the refugee crisis ahead of an emergency meeting of EU home affairs ministers and proposals from the EU Commission. They also adopted their opinion on the proposed system for distributing asylum applications, which has been shepherded through parliament by Green MEP Ska Keller. A fair distribution key needs to be urgently agreed but the EU's dysfunctional asylum rules also need to be finally overhauled. The EU Commission and Council must vigorously assess any measures by EU governments that are at odds with their European Treaty obligations or EU law and take robust action if breaches are confirmed. Further information
Aleksejs Dimitrovs - Advisor on Legal Affairs, Civil Liberties, Justice and Home Affairs
aleksejs.dimitrovs@ep.europa.eu ____________________________

Weds. 9 Sept. – EP plenary debate The first state of the union debate with EU Commission president Juncker finds the EU in disarray in its response to the various crises. Given the acute nature of the refugee emergency, clearly this will be a focus of the debate. The division and lack of solidarity in Europe's response, which have exacerbated the humanitarian crisis, somewhat mirrors the response to the Euro and Greek crises. Speaking in this context, Greens/EFA co-president Philippe Lamberts said the EU's Council has become a theatre of national egotism: “The EU was founded on the respect of human dignity and human rights. These are our common values”, he said. “The European spirit is nowhere better demonstrated than by different citizens' actions welcoming refugees across Europe. We need legal migration routes to Europe to end the deadly business of refugee smugglers”, he continued. ____________________________

On September 7th, the European Parliament's Special Committee on Tax rulings and other measures similar in nature or effect (TAXE) met for a first discussion on its draft report. After the Luxleaks scandal in November 2014, the Greens called for the creation of an inquiry committee in order to investigate who was responsible for granting sweet-heart tax deals, resulting in close to zero corporate tax being paid by these multinationals. Further information
Catherine Olier - Tax Justice Campaigner
catherine.olier@ep.europa.eu ____________________________

Other Greens/EFA motions for resolutions including urgencies