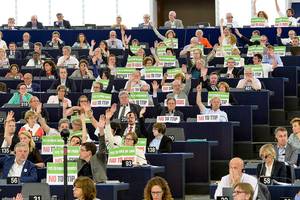 Tues. 7 July – EP plenary debate; vote Weds. MEPs voted Wednesday on draft EU rules on shareholder rights. The legislation includes a proposal by the Greens to strengthen corporate tax transparency and combat tax evasion by introducing a country-by-country reporting obligation for corporations and full transparency on tax rulings. Country-by-country reporting has long been advocated as a crucial measure for providing transparency on the tax dealings of firms, particularly multinationals, which is highly pertinent in the aftermath of the LuxLeaks revelations.

Tues. 7 July – EP plenary debate; vote Weds. A much-anticipated resolution on the controversial EU-US TTIP negotiations was adopted Wednesday by MEPs. Under direct pressure from its President Martin Schulz, the European Parliament adopted its recommendations on the EU-US trade deal (TTIP). Martin Schulz's compromise amendment on private arbitration courts is an insult to transparency. This deal is the opposite of fair trade and the Greens rejected it. This vote, which was controversially postponed from the previous June plenary session, will be the first time this term the parliament as a whole comes to grips with TTIP. There are major concerns with deregulation (via 'regulatory convergence') and transparency and investor protection. The Greens oppose any mechanism to provide private, extra-juridical means for corporations to challenge democratically-decided laws.

Circular economy – production, consumption and waste in a virtuous cycle

Mon. 6 July – EP plenary debate; vote Thu. Following the European Commission’s withdrawal of its legislative proposal on the circular economy, MEPs called Thursday on the Commission to come up with a truly more ambitious proposal before the end of the year. The report demands binding targets on waste reduction, including food waste and marine litter, separate collection of biowaste and an end to the incineration of recyclable and biodegradable waste. MEPs also called for tangible measures against planned obsolescence and improving consumer protection with regard to defect products. Products’ durability, reusability and recyclability should also be improved and toxic chemicals banned from the production line. A study by the Commission concludes that measures like these could create over two million new jobs in the EU and around €600bn savings per year.

Tues. 7 July – EP plenary debate; vote Weds. MEPs voted Wednesday to establish a 'market stability reserve' (MSR), which will slowly start to address the oversupply of emissions allowances in the EU Emissions Trading System (ETS). For the Greens, this is a rare piece of good news for the EU carbon market. The establishment of a reserve mechanism to address the disparity between the flexible demand and fixed supply of emission allowances is a welcome step. It is important to note however, that the MSR will not be a permanent fix to the enormous surplus in the EU ETS, which will, if left unaddressed, undermine the integrity of future climate targets. With further reforms of the ETS as a whole due to be put forward this month, more structural measures are needed before the claim can be made that the EU's malfunctioning carbon market has been put back on track. Greens will push for cancellation of excess permits in the context of the general ETS reform.

Tues. 7 July – EP plenary debate; vote Weds. The European Parliament adopted Wednesday a report on green jobs authored by Greens/EFA employment spokesperson Jean Lambert MEP. This report looks at how to tap into the job creation potential of the green economy. This report sends a strong signal to the European Commission on the need for ambitious proposals on the shift to a green and resource efficient economy. It proposes clear steps towards the sustainable transformation of our economy and the creation of quality, long-term jobs. However, for this change to truly work, proper investment is needed. This means a strong and stable regulatory framework, with ambitious binding 2030 EU targets on energy saving, resource efficiency and renewable energy. Key Green demands like the establishment of just transition roadmaps, social and environmental clauses in public procurement, or the phase out of counterproductive subsidies supporting polluting or carbon intensive sectors were adopted. Also, the Greens’ call for a tax shift away from labour and towards other areas such as environmental taxation was adopted. Another positive inclusion in the text is the involvement of trade union ‘green representatives’ working with employers on strengthening the greening of the economy and increasing sustainability at their workplaces. With research showing that jobs in the EU’s wind, wave and tidal energy sectors alone could grow from 34,000 in 2013 to over 100,000 in 2023, Greens call on the EU to set out an industrial strategy which directs and encourages investment in energy, resource efficiency and renewables.

Weds. 8 July – EP plenary debate Greek Prime Minister Alexis Tsipras addressed MEPs Wednesday in a very tense debate in the Hemicycle. The PM was greeted by both boos and cheers as he entered the Chamber. Mr. Tsipras criticised previous bailouts for turning Greece into an "austerity laboratory". The bailouts funds, he said, never reached the Greek people and were instead used to save the banks. The current is the result of decades of previous governments’ mismanagement, corruption and wealth inequality. He pleaded for a fair and honourable deal to avoid a break in Europe’s tradition of solidarity, and said Greece was ready to honour its responsibility. The ensuing responses of the Conservatives and extreme right turned ferocious as they were anti-European. Mr. Weber, chair of the EPP Group, violently attacked Mr. Tsipras during a patronising and disgraceful speech. He said Mr. Tsipras has the wrong friends, liked to lose and to divide Europe. In the appeal they launched and in their different interventions, the Greens called on the heads of state and government, including the Greek government, to pave the way for Greece's sustainable recovery by agreeing on a new deal. A deal that concentrates on the reforms in taxation, public administration, the fight against corruption and for a new economic dynamic. A deal that abstains from pro-cyclical austerity measures, which are economically self-defeating and socially irresponsible. A deal of real, sustainable investment. A deal to restructure and grant relief to Greek debt..

Weds. 8 July With this nomination, the Greens want to increase pressure on the Saudi government in view of Mr. Badawi’s (1) release and protect him against further flogging and abuse. The Supreme Court of Saudi Arabia has confirmed the sentence against the blogger in early June. He is due to be flogged after the end of Ramadan next week. The nomination also highlights the EU's responsibility. The EU has still not issued sanctions against those involved in the condemnation of Mr. Badawi and his public flogging. In February, the Greens had already called for more resolute action against Riyadh but geostrategic and trade interests still seem to outweigh human rights.

Thurs. 9 July – EP plenary debate and vote The European Parliament adopted Thursday, by a large majority, a report on the review the EU’s current copyright framework. The report is authored by Pirate Party MEP and vice-president of the Greens/EFA group Julia Reda. The own-initiative report calls on the European Commission to bring copyright law up to speed with changing realities and improve cross-border access to cultural diversity. The proposals also call for the focus to shift from protecting the interests of right holders to safeguarding the rights of users, cultural heritage institutions, and scientists and authors who build on existing material. One of the draft report's proposals introduced at the committee (JURI) vote stage and opposed by the draftsperson, controversially attempted to limit 'freedom of panorama', the copyright exception allowing to freely take pictures of works of architecture or sculptures in the public space. This proposal was today rejected by MEPs.

Thurs. 9 July - EP Plenary vote The European Parliament adopted Thursday a resolution on the Srebrenica genocide by a large majority. For the Greens, it is extremely important, twenty years later, to remember the victims and express deep condolences to their families. Sadly, after all this time, victims' families still face denial and political games including at the highest level at the UN Security Council. Remembering Srebrenica means remembering the single greatest atrocity committed on European soil since the Second World War. It is however completely unacceptable that Russia has vetoed a United Nations Security Council resolution that would have condemned the Srebrenica massacre as genocide. We welcome that the EP text includes an amendment criticising Russia for this. The official commemoration will take place in Srebrenica on Saturday 11 July, with European Parliament Vice-President and Greens/EFA MEP Ulrike Lunacek, representing European Parliament.

Greens/EFA motions for resolutions – urgencies on:

What drives Greens to change Europe