Worldwide Reading in the European Parliament 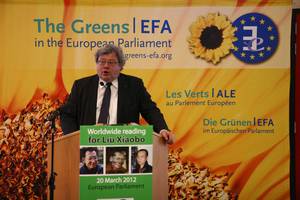 As part of a worldwide action today in 119 towns in more than 40 countries, Greens/EFA MEPs organised a reading in the European Parliament of prose and poems by imprisoned Nobel Peace Prize Laureate Liu Xiabao.

Three years ago, Liu Xiaobo was arrested in his Beijing home and later imprisoned for 11 years for “inciting subversion of state power.”

After the announcement of his receipt of the Prize, his wife faced a similar fate. A poet and photographer herself, she was placed under strict house arrest and has been uncontactable since.

Liu Xiaobo is a fighter for democracy and freedom of expression as well as an outstanding writer. He and his Chinese colleagues expressed their concern for China's future development through their manifesto, Charter 08. They argued that freedom, equality, justice and human rights are universal values of modern society, and not inconsistent with the official rhetoric of the Chinese government.

In more than 800 articles authored by Liu and in his 2005 book, Civil Awakening, The Dawn of a Free China, Liu explained that the reform process in China must have real momentum and be generated by civil society, at the grassroots level.

“The slow but progressive process of changes cannot be achieved through radical demands of the government to remodel the whole society. The present tendency is that the self-generated changes in the society will slowly push the regime to move towards change.” It is this process that Liu Xiaobo touches upon in his work that represents "inciting subversion of state power" and is why the Chinese government prefer to keep him behind bars in the hope that the international community of activists and artists who support him will simply forget. 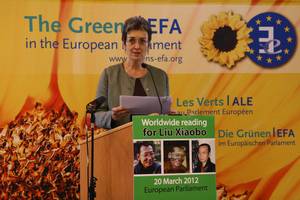 Green MEPs Helga Trüpel and Reinhard Bütikofer organised this event as part of a worldwide reading, the goal of which is to share Liu Xiaobo's work with a broader readership and remind the world that this artist, freedom fighter and Nobel Peace Prize winner is still in prison. They were joined in reading by their Greens/EFA colleagues Barbara Lochbihler, Ulrike Lunacek, Philippe Lamberts and Amelia Andersdotter as well as MEPs from other political groups. On this occasion, we would like to thank the Berlin International Literature festival for their initiative. You can find more about the readings and other participants on their homepage

This poem is part of a selection of Chinese poetry translated by Zheng Danyi, Shirley Lee and Martin Alexander, and published by the Asia Literary Review.

You Wait for Me with Dust
for my wife, who waits every day
by Liu Xiaobo

nothing remains in your name, nothing
but to wait for me, together with the dust of our home
those layers
amassed, overflowing, in every corner
you’re unwilling to pull apart the curtains
and let the light disturb their stillness

over the bookshelf, the handwritten label is covered in dust
on the carpet the pattern inhales the dust
when you are writing a letter to me
and love that the nib’s tipped with dust
my eyes are stabbed with pain

you sit there all day long
not daring to move
for fear that your footsteps will trample the dust
you try to control your breathing
using silence to write a story.
At times like this
the suffocating dust
offers the only loyalty

your vision, breath and time
permeate the dust
in the depth of your soul
the tomb inch by inch is
piled up from the feet
reaching the chest
reaching the throat

you know that the tomb
is your best resting place
waiting for me there
with no source of fear or alarm
this is why you prefer dust
in the dark, in calm suffocation
waiting, waiting for me
you wait for me with dust

refusing the sunlight and movement of air
just let the dust bury you altogether
just let yourself fall asleep in the dust
until I return
and you come awake
wiping the dust from your skin and your soul.

What a miracle – back from the dead.