Report on the horticulture sector 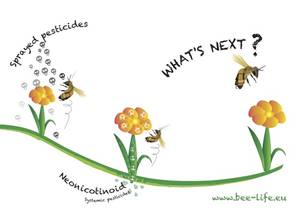 Adopted by the Agriculture committee last January and up for approval of the whole EP, this non-legislative report is full of agro-chemical industry myths and slogans, and states that fruit and vegetables need pesticides, challenges the ban on bee-killing neonicotinoids, and generally calls for watering down EU pesticide approval laws, and promotes genetic engineering including techniques such as cisgenesis. Unfortunately all these proposals survived the vote in committee, despite attempts by a progressive minority to improve the text and cut out the rot[1]. The final vote on this text took place today on 11th March. As with the report on new plant breeding techniques adopted in the February 2014 plenary, the aim is clear: the agro-chemical lobby wants to use this report as propaganda for the next few years, giving itself time to launch a new public relations campaign with the new legislature. This text is full of misleading, oversimplified statements in support of the intensive and industrial-scale model of agriculture. The risk-based approach pushed by the report is in contradiction with the precautionary approach upon which EU pesticide legislation is based and which takes account of human and environmental safety and is based on sound scientific evidence. The report generally aims to ease current EU laws on pesticide safety rules and approvals, already under pressure from the Barosso "refit", which aims to simplify laws intended to protect human and environmental safety, and which also happens to be a major part of the corporate agenda in the EU-US free trade agreement (TTIP). According to the report, the EU doesn’t authorise enough pesticides and this affects produce quality, especially for so called "minor uses" on fruit and vegetables.  The report can also be used to reinstate otherwise prohibited active substances. However, any debate on minor uses must not open up this possibility of reintroducing what have so far been considered dangerous chemicals. Indeed on the eve of the vote, the Commission responded by defending high EU standards and that any changes for minor uses will be as non-chemical alternatives as part of integrated pest management, IPM.  The agro-chemical lobby is also trying to sue the European Commission for going ahead with a ban on bee-killing neonicotinoids following scientific evidence gathered by EFSA: although nothing in this report is legally binding, calls in this report to reassess the the ban can be used to strengthen the arguments made in the corporations' legal challenge. After the announcement of the ban, more peer-reviewed scientific evidence came to light, vindicating the decision to ban the substances. As things stand today, the scientific evidence overwhelmingly supports the conclusion that neonicotinoids are an unacceptable threat to non-target pollinators such as bees. Economic studies also show the cost of lost pollination by far outweighs the costs of withdrawing the substances from the market. Any reassessment of the ban on neonicotinoids must therefore be done with full awareness of the consequences in terms of poisoning pollinators which are essential for preserving our food security. The report also calls for increasing concentration of the F&V market. But this benefits only a handful of big corporations that dominate the market and limit the access of smaller businesses. For example, the seed sector, is already highly concentrated, dominated by 5-6 groups that control between 70% and 95% of the EU market (depending on the crop). This is not a healthy economic situation. Industrial scale, intensive, resource-depleting agrochemical-dependent horticulture not only hinders healthy economic development but also generates externalised environmental and human health costs. For example, agricultural workers regularly exposed to active substances over long periods, develop specific types of lymphomas and cancers and suffer endocrine disruption. However, decreasing monocultures and continuous cropping would increase resilience to pest establishment and attack, would lower the need for pesticides and would lower human health costs. Even if the industry got a nice gift today of some pro-GE and pro-pesticide text, we and our progressive allies managed to strip out the worst parts on neonicotinoids, and cisgeneis/ GMO, A side effect of the Roll call votes placed on those sensitive parts, recording how MEPs voted, will allow them to be scrutinised for inconsistency and hypocrisy: Some groups or MEPs claim to protect bees and biodiversity but when it comes down to it, actually support the pesticide industry responsible for its destruction.

NGOs reactions to the report: