Spain, no rule of law?

Conference on freedom of expression and separation of powers in Spain

-           The conference “Spain, no rule of law?” took place at the European Parliament two days after the controversial booing of the Spanish anthem at Camp Nou stadium 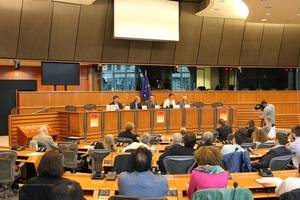 Catalan organisations Sobirania i Justícia and Drets brought together a large audience at the conference "Spain, no rule of law?" at the European Parliament.

Speakers and organisations complained about the partisan use of the Spanish judicial system, the lack of freedom of speech and the precariousness of the rule of law in Spain regarding the pro-independence process in Catalonia.

Catalan judge Santiago Vidal explained first-hand to the audience the situation that has led him to be suspended as a judge of the Court of Barcelona as a sign of a partisan judicial system.

Mr. Vidal was removed from office by the Spanish Judiciary system because of his personal involvement in the draft paper for a Catalan constitution for an independent state. Vidal pointed out that "currently in Spain there is no essential separation of powers" and political purposes directly influence judicial decisions.

The controversy over the booing of the Spanish anthem at the King’s Cup final at Camp Nou stadium recenty, which provoked an emphatic reaction from the Spanish government, was raised many times during the conference.

Participants agreed that the Spanish government's complaint about the whistling, which could result in sanctions, shows their blindness when facing a legitimate protest, their partial view of the law and the restrictions on the right of freedom of expression by citizens.

Former MEP Joan Vallvé spoke on behalf of Sobiranía i Justícia (Sovereignty and Justice), about the Catalan pro-independence process and its next steps. Vallvé said that for 30 years the "Spanish government has prevented any improvement in regional competences with the complicity of judicial power".

Meanwhile Marc Marsal, professor of Law at the University of Barcelona, on behalf of the lawyer’s organization Drets (Rights), gave examples of recent cases of public threats towards pro-independence public statements and the lack of reaction from Spanish institutions.

The conference had the support of Catalan MEPs: Ramon Tremosa (ALDE), Josep-Maria Terricabras (Greens/EFA), Ernest Maragall (Greens/EFA) and Francesc Gambús (PP), and was attended by MEPs from different parliamentary groups.

The former vice president of the European Commission and MEP Viviane Reding received the Catalan delegation just prior to the event. During their visit, judge Santiago Vidal and representatives of Rights and Sovereignty and Justice met with the Permanent Representative of the Government of Catalonia to the EU, Amadeu Altafaj.