Jordi Solé: #SOTEU - 'Europe must stand by its citizens'

But as well as responding to the economic challenges left by the Covid-19 pandemic, Jordi Solé also reminded the Commission President that the EU has a duty to act when democracy and self-determination is under threat within its borders, as is the case of Catalonia.

"That’s why it is so important that this time the EU, contrary to the 2008 crisis, stands by its citizens. That the EU shows it is useful to fight against a pandemic; for helping the economies recover and taking care of those people and business most affected by it; and for transforming these economies into greener and fairer ones.

"But the EU also has to deliver when conflicts on democracy and self-determination arise within the Union.

"Madame President. It is not me who should be addressing you right now. It should be Oriol Junqueras, elected MEP and one of the Catalan political prisoners, shamefully behind bars for almost 3 years.

"Yes, here Europe must deliver too, because this injustice is a stain not only for Spain but for the whole of Europe. So help them and the exiles be back home. And demand that the Spanish government once and for all be brave and negotiate a solution for Catalonia based on respect and real democracy." 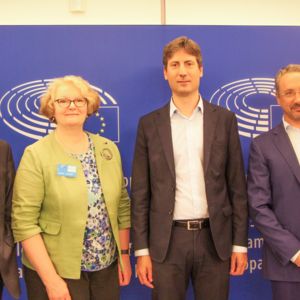