As you know the commission proposed a pact called the European Green Deal, that will be the roadmap for Europe to tackle climate change and become carbon neutral in 2050. In our previous blogs we have explained what this pact is, and what it is not. In this blog, we would like to address an important aspect that is missing: MONEY. In the world we live in today, to achieve the goals that the EU has set, we need a good budget. But how much do we need?

For the whole of Europe, how much would it cost us to tackle the climate crises?

We have to be honest, these kinds of estimations are hard. This is because the ambitions and goals are still not very clear either, and there is also a huge gap  between the emission  reductions needed and the national pledges of member states, as well as the fact that some financial plans are just estimates.

The European Court of Auditors (ECA), whose role is to check EU funds are collected and used correctly, and help improve EU financial management, has estimated that if the EU wants to reach its targets (carbon neutrality in 2050), it will have to invest 1,115 billion euros per year. This is with a very ambitious but necessary scenario in mind. This is not an exaggeration, since it really is the European Court of Auditors who released these figures, who are also really aware of budget constraints.

This is a lot of money and a lot more than the EU budget can afford. This is why the Commission is looking at other contributions from member states, the private and public sector and the innovation and modernization funds. 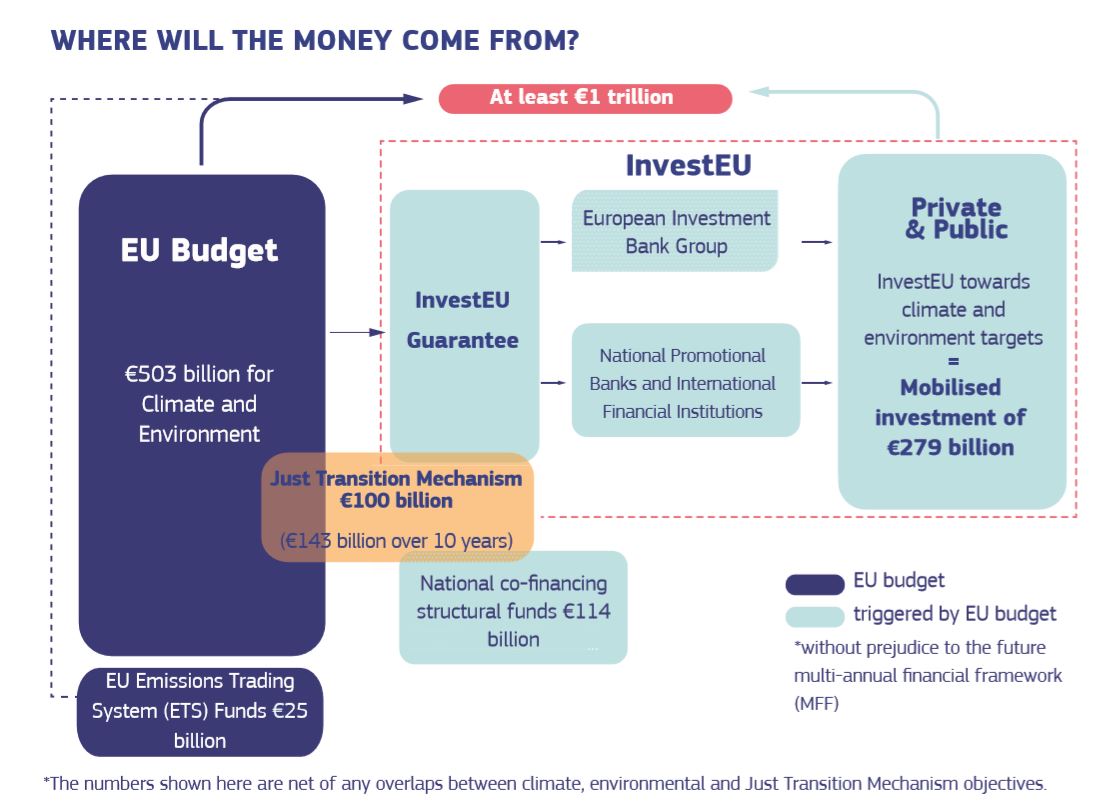 Nicholas Stern also stated that this transition would be positive for our economy, because the economy will emerge stronger from the implementation of the ecological transition.

The ECA also warns us that ‘Without rapid decarbonization of the world economy, the global climate is expected to warm by 3°C or 4°C by the end of the century.

IS THE EU UP TO THE TASK?

The EU is NOT ready. Actually the European Commission has requested a collective contribution from all members states to achieve 100 billion euros. The problem is:

On the official website of the European Commission we find that ‘the Commission proposes to set a more ambitious goal for climate mainstreaming across all EU programmes, with a target of 25% of EU expenditure contributing to climate objectives.’

This is absolutely not enough and it shows that using 25% of the MFF instead of 20% is still not a relevant increase. Much more will be needed.

*The multiannual financial framework (MFF) is the EU’s long-term budget. It sets the limits for EU spending – as a whole and also for different areas of activity – over a period of at least five years. Recent MFFs usually covered seven years.

This is far from impossible. And we know this because it has already been done before. In 2014, The European Central Bank (ECB) ‘printed’ 1 trillion euros to save economic growth. Also globally, when you think about the global military expenditure which stands at around 1.7 trillion dollars PER YEAR since 2009 it’s clear that huge spending is possible when we prioritise.

But there is another side of the story, that makes things even easier. Our spending is very contradictory. According to Corporate Europe Observatory, the ECB has injected around 67 billion euros into the Eurozone economy to fund corporate bond purchases since June 2016.

Among the list of corporations favoured by the ECB are some from the dirtiest industries on the planet. The bank has not revealed how much has been spent on the bonds of individual firms. But oil and gas companies, such as Shell, Total and Repsol, appear to have received particular support, along with car makers and highway firms

So, a first and very simple solution would be for the EU to stop investing in fossil fuels and put the whole EU budget into the transition. The climate transition goes through all sectors, some will need more help than others, but everyone will need money to be able to change. And this is possible, especially because of Covid-19.

RECOVERY PLAN FOR COVID-19: COULD IT FINANCE THE GREEN DEAL?

As we said in our previous blog: ‘Will COVID-19 destroy or empower the European green deal?‘ The corona crisis can be a possible catalyst for climate measures. After experiencing the economic collapse, it’s a question of how we are going to rebuild our societies afterwards.

The Greens/EFA group in the European Parliament has set up a recovery plan to rebuild the economy in a green and sustainable way that would also finance the measures described in the green deal. The Paris Agreement and the Sustainable Development Goals, as well as the climate and biodiversity are all core principles of the plan.

A first economic and social package is needed to ensure that the damages from the Corona crisis will be as small as possible, and on top of that, that people and the economy will have to be supported by a stimulus package and the Green New Deal will be the matrix for the reconstruction.

From the year 2022-2032, and we’ll quote: ‘We call for a massive sustainable investment plan by mobilizing 5 trillion euros over the next 12 years. We propose fundamental changes to the labour market, including the banning of zero-hour contracts, the end of in-work poverty and universal social support schemes. A Care Deal for Europe can refocus our energy on care, social and education services, revising of our work-life balance rules, our housing supply, and protecting the most vulnerable, whomever they are.’

This sounds very promising like the 180° turn that we need. It is time to change drastically, and put all the financing we can, but most importantly stop financing projects that are going the wrong way. This transition needs to happen including everyone, and leaving fossil fuel in the ground.

To end this blog, we had the chance to interview Pierre Larrouturou. He is a member of the group of the Progressive Alliance of Socialists and Democrats in the European Parliament, and a member of the Committee on Budgets.